WEBecon is governed by the following general principles:

WEBecon is composed of a total of six (6) economic think tanks, one of each Western Balkan country. Joining is voluntary, as well as leaving. In case of a think tank left the Network, other members will agree on replacing it with other think tank from the particular country.

All members of WEBecon have equal rights, obligations and responsibilities.

All members of WEBecon have a good reputation and contacts with the entities they collaborate with, such as government, donors, the civil and academic sector, the private sector, and so on.

All members of WEBecon have good management and professional staff, as well as orderly and transparent finance.

All members of WEBecon are willing to undertake fully objective initiatives, research and analysis and present useful and practical ideas and conclusions.

WEBecon may be represented by any of its members, part of them or an individual member. Any form of representation of WEBecon is done in a pre-informed and consensual atmosphere.

Members are free in conducting their own activities and in joining other initiatives. However, members will refrain from undertaking activities that constitute a direct competition to WEBecon’s activities or that jeopardize the opportunities open to WEBecon which it intends to seize. Particularly, members will always give priority to WEBecon before joining other initiatives for the same purpose (e.g. project applications), unless a consent has been obtained by the other members.

Decision-making within WEBecon is consensual. However, when a consensus cannot be reached, at least four (4) members need to provide their consent.

The network is of an informal character, until decided differently. While there is no leader organization, Finance Think – Economic Research & Policy Institute, Skopje will be considered an administrative manager. Hence, Skopje, North Macedonia will be considered the seat of WEBecon. 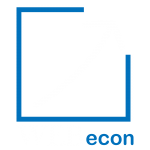